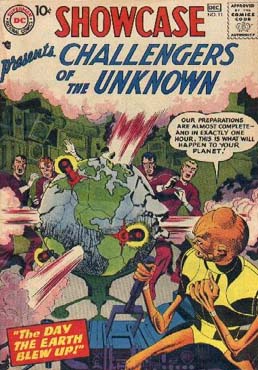 Let me tell you about the Challengers of the Unknown.

My relationship with the Challengers began in the early days of my comic book reading and stretched all the way into my DC editorial days. I loved the Challengers, but was continually frustrated by them at the same time.

It all began in that magical summer of 1958 at Camp Tockwogh. I've written about the camp before and recall that it was a hotbed of comics. They were everywhere at camp. On just about any given flat surface, a comic book could be found. They appear
ed to be community-owned books, passed around from camper to camper until they were just about falling apart by summer's end. Lots of them were very memorable for a couple of reasons. Firstly, for me, many of these were my first encounters with the characters.

Secondly, DC Comics in particular, seemed to be on a Silver Age creative high in that summer of '58. If one was to look back then, they would find some spectacular stories: Superman #123, August, 1958, featured the "test" story for Supergirl who, less than a year later debuted in Action Comics #252, May 1959. Bizarro made his first appearance in Superboy #68, October, 1958. Batman was in his Silver Age glory fighting crooks and aliens in his own title, as well as Detective Comics. The Martian Manhunter had secured his position as a popular back-up feature in Detective Comics as well. House of Mystery, House of Secrets

, Mystery In Space and all the other DC anthology titles were at the top of their collective game. And there was Blackhawk, holding his own after being bought from Quality Comics a few years earlier. Jack Kirby had begun drawing the Green Arrow stories in World's Finest Comics and Adventure Comics as well as doing the Challengers of the Unknown.

Like I said above, let me tell you about the Challengers of the Unknown. My first encounter with them was the issue I saw at camp, Challengers of the Unknown #3, dated August/September, 1958, cover featuring "The Invincible Challenger". I saw it, but I didn't read it. I do not remember why I didn't read it at the time. I can only assume some other camp activity commanded my attention. But I didn't forget it. The image of the Challenger Rocky, emerging from a crashed space capsule, shooting flames from his hands as his teammates looked on in horror, stuck with me forever. This was one of my first frustrations regarding the Challengers. (Other comic book historians have noted that the Challengers, and issue #3 in particular, were the predecessors of Marvel's Fantastic Four, which Kirby created some years later--but that's another story).

Now let me tell you about walking to school. I walked to school. There were no school busses, no parents drove me and there were no car pools. My brother and I walked to
school through our suburban neighborhoods. At the time, it seemed like a long journey, but it was actually less than a mile. As we walked along, we were joined by many more kids also headed to the Alfred I. DuPont Elementary School. The walk home was always a pleasure. School was out and some genius had erected a Dairy Queen right in our path. I formed many friendships on those walks to and from school, some of them lifelong. The school is no longer there, it has since been demolished for a shopping center. The Diary Queen is now a hot dog restaurant. 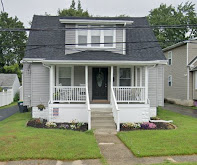 One friend I made on my walks home, whose name I sadly no longer remember, gave me a memorable comic book experience. I do remember his house. In fact, I recently found it on Google Maps. It had a wonderful front porch that I would often visit on my way home. On the floor of this porch were scattered dozens of comic books. It was a stopping point along the way, were I could sit and read a few comic books. Since I was usually expected home, this friend would often let me borrow some issues as long as I returned them on my way to school the next day. I never took advantage of the privilege, which is why I remember some comic books vividly, but I didn't actually own them. They had been loans.

On one truly memorable day, my friend lent me three comic books: Tales of Suspense #2, March, 1959 (with a spectacular Steve Ditko cover), Weird Science-Fantasy #26, December, 1954 (the Flying Saucer report) and Showcase #11, November/Decemb
er, 1957 (featuring the third appearance of the Challengers of the Unknown). 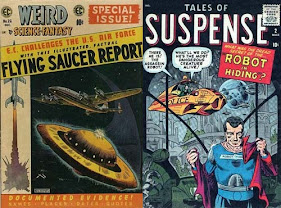 Indicating the Weird Science-Fantasy, my friend informed me, "The stories in this one are true." (And they were. The book was filled with short one-, two- or three-page adaptations from actual news reports of UFO sightings.) However, when I returned home, I forgot which one he said was true and misremembered it as being the Showcase issue featuring the Challengers of the Unknown. The epic story in this issue, "The Day the Earth Blew Up" was written and drawn by Jack Kirby and I first read it, believing it was true. Now this belief was reinforced by some of the story content. For one, an early scene takes place in the Arctic base, Little America. Now I had seen Little America on one of Walt Disney's True Life Adventures, so I knew it really existed. Secondly, the story included aliens, and I was well-aware of UFO reports (even before reading the Weird-Science Fantasy issue). Thirdly, at the end of the story, after the Challengers and the American military had defeated the alien invaders, Challenger Rocky Davis says, "Mankind will never know how close it came to disaster!" To which Red Ryan responds, "…or the part we Challengers had in preventing it!" 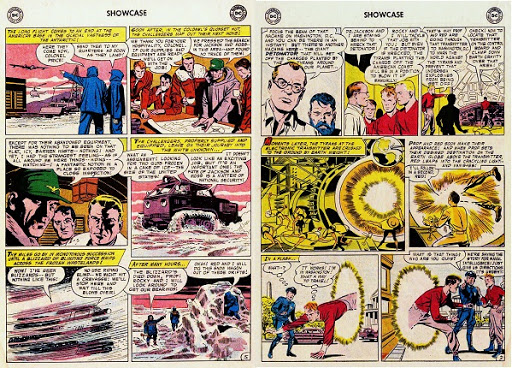 All of this went to convincing me the story was true and, in an effort to prevent a world-wide panic, the government had "hid" the story in an innocent comic book. I held onto this belief for quite some time, probably until I encountered my next issue of the Challengers of the Unknown. Of course, this made Showcase #11 featuring the Challengers one of my favorite comic books!

Before I continue, let me tell you a little more about Showcase #11. It is a landmark comic book, both in comics history and in the career of creator Jack Kirby. The book is filled with "Kirby concepts"; ideas and visuals he would use again, years later. First of all was the aliens' method of travel: A teleportational "tunnel" which would appear again in Kirby's Fourth World series as a "Boom Tube". 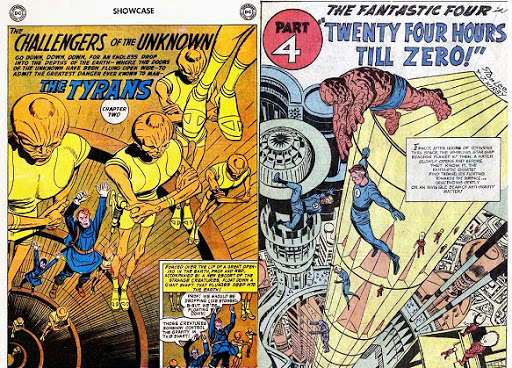 The story was divided up into four "chapters," each with its own "splash" panel, most of the time a full page. One of those chapter openings featured a stunning perspective shot of the aliens floating down a "gravity shaft" with two of the Challengers as their prisoners. Years later, Kirby re-created this page in Fantastic Four #7, October, 1962.

So my introduction to the Challengers was sporadic and out of order. I had first seen them on the cover of issue #3 of their own comic, but the first story I actually read was Showcase #11, one of their tryout issues. I finally caught up with the Challengers again with issue #9, August/September, 1959. By this time, Jack Kirby had left and the book was being draw very well by artist Bob Brown.

I have heard many reasons as to why Jack Kirby left DC back then and why Challengers of the Unknown #8 was his last issue. Some of the reasons were related to disagreements over the breathtaking Sky Masters of the Space Force comic strip by Kirby and Wally Wood which editor Jack Schiff had brokered. Another was supposedly over the length of stories; Kirby preferred book-length epics, allowing for more intricate plots, where Schiff liked short stories, believing his younger audience lacked attention spans for longer tales. They compromised with a longer lead feature and a shorter back-up story in each issue when most of the DC comics at the time featured three stories in each issue. Of course, Kirby took the book-length concept with him when he left to join Marvel. 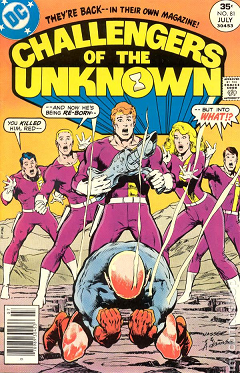 The original run of the Challengers of the Unknown ran for 74 issues, followed by 6 issues of reprints. After three issues as a new lead feature in the reprint title Super-Team Family in 1976, the Challengers returned to their own title with #81, June/July, 1970, with me editing. I was thrilled. There were a number of things I wante
d to accomplish with the characters and the title, but time and other factors did not allow me the opportunity.

As I mentioned earlier, there were lots of frustrations surrounding the team. For example, the writers and editors seemed to have some trouble deciding on Prof's last name. He started off as "Prof Haley", became "Prof Hale", and then "Prof Harrison" and back again to "Prof Haley" before it stuck. Sometimes, he had two different names in the same issue. Red Ryan started off as a "circus daredevil", but later became an expert rock climber. Ace's piloting and Rocky's champion Olympic wrestling background remained consistent.

Another thing I always had an issue with was the Challengers' uniforms. In their first appearance, they wore one-piece jumpsuits like Ace did, their aviator member. They were drawn as one-piece, but the colorist made them two-tone, giving them burgundy tops and purple trousers. Later Showcase issues had them modified a bit so they were clearly a shirt and pants with a belt. When they finally got their own book, they had gone back to the solid burgundy, which they wore until issue #43, April/May, 1965 when someone made a horrible decision to give them yellow and red costumes "super-hero" togs. The uniforms were improved in #70, October/November, 1969, going back to a burgundy jumpsuit with a yellow stripe and fur collar. One thing I really hated were the god-awful hot pink Challengers' uniforms that they wore in the issues I edited. This wardrobe directive had come from the publisher. I had no control over them, but I loathed them.

When I was reading and editing the Challengers, their real first names were never revealed. Maybe they were given first names in later issues I never read, but I always had my own ideas about what they would be. Their first names would have been: Alan Morgan (which, upon reflection, sounds a bit too much like "Alan Moore", but I made this name up long before I knew of Alan Moore), Harrison Haley (picking up on the early issues' indecision on exactly what his name was supposed to be), Dennis Ryan (because I had a childhood friend named Denny Ryan) and Robert Davis (because it sounded like some executive's name, a contrast to Rocky's rough exterior).

Next: Let me tell you about Superman!